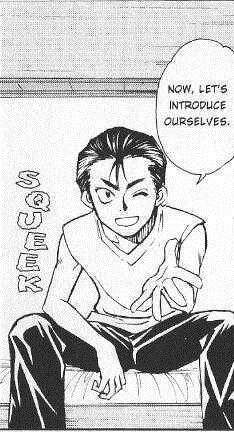 Koiwa Teppei is a forward-turned-wingback for Tokyo Select; his jersey number is 19. Teppei is famous for (and proud of) his speed, but is notably lacking in skill. At one point, he was a member of track and field, but became heavily invested in soccer as a result of his rivalry with Hinase Mitsuhiro.

He looks like a delinquent, but he's a mommy's boy.

Teppei first shows up in Vol. 12 IN THE DISTANCE when Kazamatsuri Shō opens the door to his room to find him squatting on the floor making an intimidating(?) face.

His ball control is sloppy at best and he's easily fired up, for better or for worse, but for all his technical failings, Teppei is more than formidable in physical aspects. He's easily one of the fastest characters in the series, and on top of that can jump high enough to do flips with ease. He doesn't so much have a style of play as he does a tendency to just sort of charge the ball recklessly, but he can make it work as sort of a successful strategy in a way.

Community content is available under CC-BY-SA unless otherwise noted.
Advertisement