Edit
watch 01:36
We're Getting Mutants in the MCU - The Loop
Do you like this video?
Play Sound

Shō Kazamatsuri (風祭 将, Kazamatsuri Shō) is the main character of the soccer manga and anime Whistle!. He is a regular of the Josui junior High varsity soccer team and plays the position of Forward with Satou Shigeki; his jersey at the time was the number 9. For a soccer player, Shō is pretty short (146 cm), which in the beginning acts as a large obstacle for him to surpass, but later he learns to use to his advantage. While not being very good at soccer, Shō has a thirst to improve and never gives up. His determination often inspires the people around him, and is something that even his team captain, Mizuno Tatsuya admires. While he's neither the best nor the leader of his soccer team, he is the heart of it.

Unknownst to his soccer teammates, Shō is the son of Shiomi Kensuke, one of Japan's most famous soccer players, known for scoring goals from a non-existing zero angle (a technique that Shō would later use in his match against Hiba Junior High). After his parents died in a car accident, he was adopted by his uncle and aunt, Mamoru and Reiko Kazamatsuri, which is where he received his family name. Originally, he never realized who his real parents were until he started playing soccer. Along with the fact that his brother, Kazamatsuri Kō , does not look anything like him, a relative told him that he could not go against blood, which at first seemed ambiguous to him. He found out the truth after transferring schools; he realized that there are different names for his parents on his family certificate, though he kept it to himself since he considers himself lucky to have two mothers and two fathers.

Kazamatsuri Shō was born on May 10th, 1984. He is adopted (his biologial parents died in a car crash), and has an older brother named Kazamatsuri Kō. The story begins with Shō as a transfer student at Josui Junior High, from Musashi-no-mori, the school renowned for its legendary soccer team. Shō is 146 cm. tall, and was on the third string soccer team at Musashi-no-mori, because everyone thought that he was too short to be able to play soccer well. 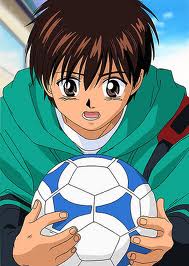 His character has a few quirks. He has an odd habit of slapping his cheeks with both hands to get himself motivated. He also has a very optimistic attitude and is very open-minded to the point that sarcasm and arrogant comments usually don't work on him; rather he takes them literally and usually agrees with the offender, which either annoys or amuses them. He can get very angry sometimes and yell at the offender, but tends to become embarassed about his actions afterwards. Due to his late night soccer practices, Shō often falls asleep in class, causing Shigeki to jokingly say that Shō has already given up on school. He has a talent of being able to sleep anywhere in any position. Shigeki also calls him "Pup" or "Puppy"

Shō is far too focused on soccer to have time for romantic relationships. Sakurai Miyuki has a large crush on Shō, but he is oblivious to this, despite her seeking him out in order to give him chocolate on Valentine's Day.

Shō joins Josui Middle School as a 2nd Year. After a misunderstanding about his position on the soccer team at Musashi-no-mori, Shō quit the soccer team at Sakura Josui in order to train harder and become accepted; he even stopped coming to school for a time.Mizuno Tatsuya, an ace MF (Mid-Fielder) on the Josui team, finds Shō practicing one day at the riverbed. Mizuno then challenges the current captain of the Josui soccer team, Honma, to a match to decide on who should be captain. Collecting a group of substitute players, including Takai Masato, Hanazawa Hideomi, and Koga Yoshihiko, Tatsuya encounters Shō at the riverbed and asks him to play with the sub team to challenge Captain Honma. Devising a strategy, the sub team beats the regulars, and Tatsuya becomes the captain.

Shō plays as a forward with the Sakura Josui soccer team; he is no. 9, which signifies the main striker on the team. Throughout the series, Shō continues to develop as a soccer player, meeting all kinds of new allies and rivals like Ryoichi Tenjou and Tsubasa Shiina.

Eventually, he is selected along with GK (Goal Keeper) Fuwa Daichi, and Mizuno Tatsuya from Josui to participate with the Tokyo Select team, which had selected the best players from junior-high teams in the Tokyo region to play for the team. Being smaller and having considerably less ability than the rest of the players on Tokyo Select, Shō once again found himself as a sub; however it was his stubborn will and perseverance that drove him to stay with the team and to keep developing his ability. He qualifies for the Tokyo Junior Senbatsu Team, though only as a substitute player. Though many of the other Senbatsu players found him to be a less than average player, they soon realize his potential as a forward. He also becomes the one to bring the rest of the team together. After Tenjo leaves, Shō takes his place as the number 19 forward. He shows his real skills in a one-on-one battle with Tenjo, and in the game against the Seoul Senbatsu Team.

During the game against the Kansai Select, Shō suddenly fainted when it was down to stoppage time. It is revealed later that something has happened to his left knee and the doctor stated that there is a possibility of him not being able to play soccer anymore. But thanks to the encouragements from his teammates, family members, and other people, he gains the courage to go to Germany to heal his knee. At the end of the series, it is shown that he returns from Germany and continues playing with his fellow teammates.

Community content is available under CC-BY-SA unless otherwise noted.
Advertisement